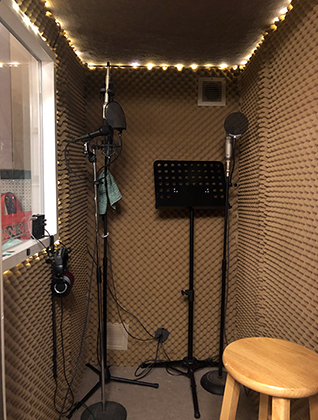 After relocating to Washington state, my wife and I found a house that had a separate building on the property that I could use for my new studio. It was formerly used as a wood shop by a prior owner and so it had all sorts of wood shop related things, like air compressor tubes, random anvils bolted to the floor, sawdust vacuuming tubes, and hooks all over the place to hang whatever the former owner needed to hang. It was perfect for my use! And of course, I might as wall call it the Woodshop studio as it went through its transformation into my new studio. And I’m definitely keeping the anvil and leaving it where it is, you never know when we might need to use it as a percussion instrument.

The building is 24×36 feet with a 14 foot vaulted ceiling, so it has plenty of room to record a full band and it’s moderately insulated to help keep warm during the cold Washington winters (also has a wood burning stove that I’m definitely keeping and using), but the insulation only provides moderate sound proofing. We’re on an acre and our neighbors are far enough away that any sound that escapes the studio isn’t much of a problem but I was looking for a controlled environment that I could use for vocals or quieter instruments without fear of random outside noises leaking in and ruining that perfect take. So I was on the lookout for a vocal booth to add to the studio, but these can be very expensive!

Fortunately my frequent monitoring of the local Craigslist provided me with the opportunity to pick up a used 4’x6′ vocal booth for a decent price and only required the rental of a small moving van and the help of a good friend to take it apart, transport it (in the pouring rain, of course), and set it up again in the studio.

So here it is in all it’s glory (with a few nice German microphones from the mic vault). 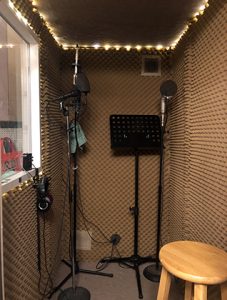 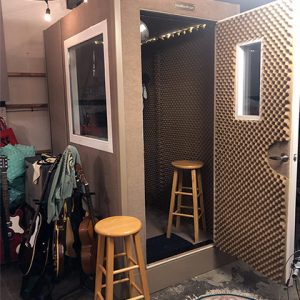 To test it out, my band, Opaline, did a rehearsal in the studio with our singer, Stephen, singing in the booth. Our band uses in-ear monitors and we immediately noticed the clarity of the vocals and of course, the lack of other instruments (primarily drums) bleeding into the vocal microphone. Also Stephen didn’t have to sing as loud to compete with the sound in the rest of the studio (again, primarily drums). I recorded the rehearsal as well, and essential I was able to get studio-quality sound with the entire band playing at the same time. Yes, I’m pleased with the addition to the studio!