Beyond music production, I also produce other audio-video media including podcasts.

With 2020 being the work-from-home year (and hopefully the only one), I spend some extra time in the studio to work on New York Times Best Selling Author Kelly Corrigan on her new podcast project: Kelly Corrigan Wonders. 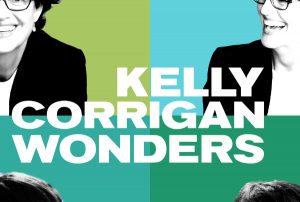 I worked with Kelly a few years back on her initial podcast efforts where we produced interviews with various guests which centered on a concept or theme. It was a lot of work and a lot of fun, but it never was published due to her needing to take a career detour to work on the Nantucket Project.

I was thrilled when Kelly called me up to ‘get the back together’ and renew our efforts on a new podcast project. I helped her procure the equipment for her home studio set up and we built a workflow and a schedule with her wonderful producer Susan George. As this was a completely remote project, we faced a few engineering challenges to record and produce good quality audio without using a professional recording studio. Together we worked through these challenges and the first podcast launched on PRX on Oct 6, 2020 with a compelling interview with Kate Bowler. The first 8 weekly episodes have also been produced as radio broadcasts programmed nationally on public radio stations.

Editing interview audio can be a lot of work! Because Kelly recorded most of her audio in her own basement studio, there were some ambient noise challenges where I needed to use a special tool to remove the noise from the room as well as anomalies that occur in non-professional recording environments. Then there were the edits that Producer Susan sent me to improve the listening experience and create the right timing for the broadcasts (which need to follow a broadcast clock before they can put it on the air). You can see all the vertical black lines in the picture below, each one is a carefully placed edit (cut in the audio to remove or move a section). 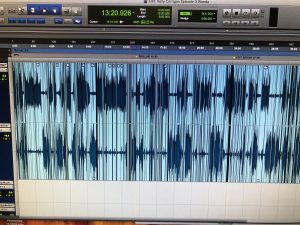 Kelly and Susan did a great job of creating the basic content and communicating what they wanted edited and how they wanted the production to ultimately feel like from the music cues to the overall tone of the podcast. They were a pleasure to work with. Give it a listen yourself!