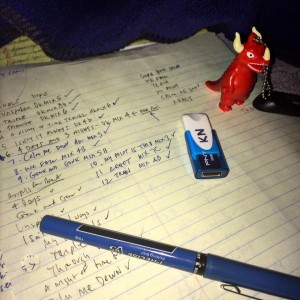 Checking off approved mixes for the album.

At the end of March 2016, I finished the mixes for Kari Newhouse’s latest album, to be titled, “The Lucky Few”. But really, I’m truly the lucky one because I had the honor of being involved with this project, almost from the very beginning.

I mixed Kari’s previous album, Songs from Apartment 4, which she had done all of the recording and production from her home studio. It sounded excellent when she sent me her initial mixes, but she wanted an extra ear to take her songs outside of her safety zone. I opened up the mixes a bit, adjusting the equalization and widened the spacial spectrum for the instruments. I always characterize Kari’s music as “lush”; layers of rich acoustic guitars and dense electronic textures that envelope her vocals. My job on that record was to make sure that everything had a place to exist. I think it came out well and you can judge for yourself – check it out at her website.

A true artist never rests, so after Songs from Apartment 4 was complete, Kari continued composing songs, demos in Protools in her home studio, and sending me demos every few months. This time, as she amassed a solid collection of completed songs, she asked me to help in the production and to play some guitar and bass on the new songs. How could I refuse!

We came up with a plan. Once again, her initial demos were really good sounding and layered with many tracks featuring acoustic guitars, electronic drums and pads, and lead and background vocals. But this time Kari wanted real drums to blend in with the electronic rhythmic loops so we booked Type Foundry in Portland, Oregon and enlisted the talented Rob Milne to bring in his drums for a weekend of tracking.

I had already added in some of my own guitars and bass tracks as well as some fake (but real sounding) drums to her existing Protools sessions in order to adjust the feel and so that Rob would have some idea of what we were looking for in terms of drum sounds and groove. We didn’t want him to just mimic the existing drum loops and we were hoping for his interpretation of the songs, rather than to just copy our rhythmic patterns. And he knocked it out of the park! In a fairly rushed two-day session at Type Foundry we managed to replace my drum tracks with his skillful playing on all of the songs.

Type Foundry is a fun place to work. There are two large rooms with lots wood and fairly high ceilings. Here is where I get into the geeky stuff, feel free to scroll to the bottom if you don’t care about the technical details. The control room is centered around a vintage Trident Series 70 console but we primarily used the external preamps: API 312 and 512 on kick drum and snare, Vintech X73’s (Neve clones) on rack toms and floor toms, Syteks (I’ve got four of these myself, AMAZINGLY clean and under-rated preamps!) on the overhead microphones, and an old UA 1108 on the stereo room mics. All solid-state preamps of varying color to give dimension to the drums. We monitored everything through the Trident. 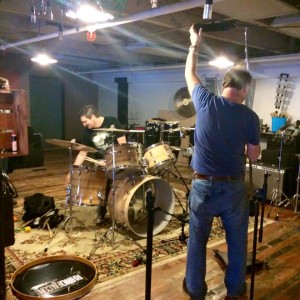 Because we were tracking for all of the songs on the album, I wanted to be able to record the drum kit in such a way that I had a lot of control in the mixing stage because I didn’t want the drums to sound the same on every song. So a balance of close and distant mic’ing was called for. One of the reasons I wanted to record at Type Foundry is that their biggest room somehow makes drums sound absolutely wonderful. Especially at a distance. The early reflections were pleasing and if you wanted to get that John Bonham, When The Levee Breaks drum sound, this would be the place to do it. But you also could get a clean, up-front sound for the drums if you wanted. 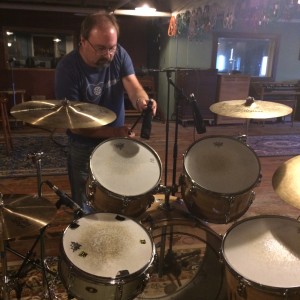 For close microphones I used the AKG D112 inside the kick and AKG 414 large diaphragm condenser just outside the shell to pick up the depth and extended low frequencies of Rob’s kick drum. The standard Shure 57 was placed on the top of the snare with a Sennheiser 441 underneath to catch the rasp of the snares themselves. All the toms were mic’d with Sennheiser 421’s, the 1970’s standard for big tom sounds.

had decided that I didn’t want to use condenser mic’s for overheads, instead opting for the more natural sound of ribbon microphones. So I used the studio’s Crowley & Tripp Naked Eye ribbons to pick up the hi-hat and ride, placing them equidistant from the snare and about two feet above cymbals. These gave me a nice up-close image of the full drum kit with a focus on the hat and ride, but it was a softer sound that if I used U87’s or some other large condenser. 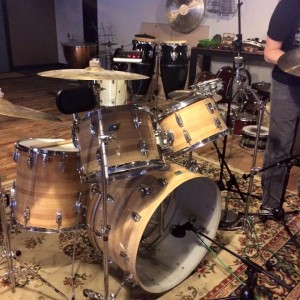 So I had the close microphones all positioned to give me plenty of control over the individual drum sounds. The next step was to pick the right microphone and position it to get the best possible image of the full drum set as one instrument. I choose the AEA R88, a fantastic stereo ribbon mic, and set it up about 7 feet up and 10 feet away from the drum kit on the ride side of the kit. If you were sitting on the drum throne you would see the microphone facing you over the right rack tom and the cymbal that you see in the picture at the right. This microphone alone, amplified by the Universal Audio 1108 preamp presented a beautiful image of the complete drum sound augmented by a great sounding huge, wooden room. 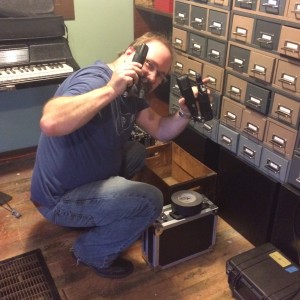 Once we had the drum kit mic’d up I had Rob play his kit so that I could set the preamp levels, get his monitor levels sorted out and let him warm up. I didn’t use any compression as I recorded, preferring to make decisions on dynamic processing in the mixing stage. Rob’s playing didn’t required any limiting as his playing is very controlled.

We spent the weekend tracking drums and even had enough time to record a group stomp for one of Kari’s down-home-on-the-porch sounding songs; five of us stamping our feet in time on the 100 year old floor boards. Yes, I mic’d the floor for that one. We wrapped up the Type Foundry session and I took the tracks back to my studio in Oakland for tweaking.

Kari flew down in January 2016 from sunny Portland to rainy Oakland (ironically) to re-record her vocals as well as do some guitar overdubs. I had already recorded my own bass playing on the tracks as well as some keyboard and guitar parts. For bass, I played an active Fender Precision bass as well as an old Squier P-Bass beater that sounds really punchy. I recorded them direct into a UA Apollo interface using their emulations of the classic 1176 compressors, which I think sound pretty close to the real deal, at least in context of the rest of the mix. Guitars were also direct through the same interface and I used Marshall and Chandler emulators. No real amps were used, which is kind of sad, but damn convenient for late night recording. I used Fender Telecasters and a Stratocaster on one song that called out for a David Gilmour-esque solo.

We used most of Kari’s original demo guitar and keyboard tracks because they sounded very good. She later sent me some additional overdubs that she had recently recorded in her home studio that I simply dropped on the grid to replace the originals.

While Kari was in Oakland we recorded all of her vocals in one weekend. Since she had already spent considerable time recording the demo versions of the songs, she knew exactly how she wanted to sing them so we were able to move through the tracking phase pretty fast. We tried a number of vocal mics and preamps to find the most favorable combination for her voice. We started with the Shure SM-7, a Neumann U87 and a U67 through a multiple preamps including a Neve clone, API 312A clone (both in my opinion equal or better than a lot of the originals that I have used) and the Apollo preamps. We settle on the U67 into the Neve followed by my Anthony DeMaria 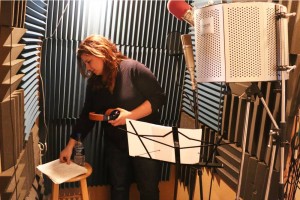 C1000 compressor (basically a Teletronix LA-2A clone of sorts -a tube compressor that makes everything glow in a good way), finally into my UA converters. This chain brought out Kari’s rich midrange and presence but not in an overly bright way. The U87 was great but a little too ‘enhanced’ and hyped-sounding and the SM-7  seemed a little too dark for her voice.

Kari flew back to Portland and I did the first draft of reference mixes for her to review. We had a process where I would go through all the songs to try and quick deliver mixes for her to review and make notes, then I would start again from the beginning and make mix adjustments from her notes. This way I could cleanse my palette and get a change of musical scenery by not staying too long on any one song. Most songs took two or three passes for us to get our satisfactory mixes. I mixed them all in-the-box in my studio through Yamaha NS-10’s, Event ASP8’s and Genelec 1031A’s. EQ and compression was all provided by Waves, Universal Audio, Sound Toys, and the standard set of Protools plug-ins.

I provided Kari with my own version of final masters (EQ’d, compressed and limited – what I call ‘radio-ready’) so that she could listen in her car and hear her songs relative to other songs on the radio and get a good idea of how they would sound when professionally mastered. I also provided her, as I do for all my clients, with “premaster” versions with no limiting or compression and about 6db of headroom for the mastering engineer to have more dynamics to work with on the the final version. Kari will have Kevin Nettlingham in Vancouver, Washington do the final mastering to get one more perspective on the songs before you, my gentle reader, get the final glorious results.

So this long winded missive was intended to give you an understanding of how my production service works as well as share my joy of the geeky process of recording music. What really matters to me is that music of quality still gets made in this age of music industry chaos. Kari is the real deal, a talented singer-songwriter as well as a great audio engineer and I encourage you to listen to her music and if you like it, buy it!